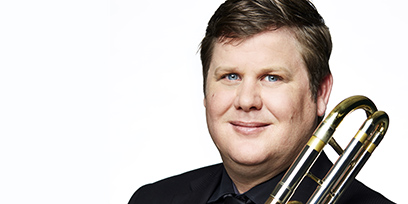 Brett Favell holds the position of Associate Principal Trombone in the Opera Australia Orchestra having first joined the Orchestra in 2003. Brett started his musical studies at the age of twelve and under the tutelage of Arthur Middleton went on to complete a Bachelor of Music at Queensland Conservatorium of Music. From an early age Brett played in the Cairns Brass Band conducted by his father, moving from instrument to instrument to fill in gaps in the ensemble when other musicians left the region.

Brett has won a number of awards throughout his career including the Australian Trombone Association Solo Competition in 1994. Before joining the Orchestra Brett played with Harmonic Brass Munich and the Tampere Philharmonic Orchestra in Finland.

Fun fact: Brett was very lucky, as he was a member of an ensemble that spent most of the time on the road. Brett has travelled and performed in Egypt, Jordan, Sweden, throughout Germany, Switzerland and Austria, which were all fantastic experiences.