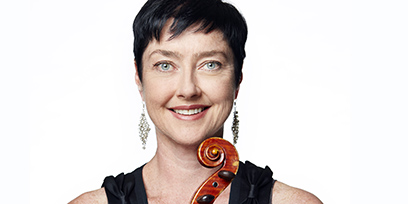 Virginia Comerford holds the position of Principal Viola and Section Leader in the Opera Australia Orchestra, having first joined the Orchestra in 1989. She began her musical studies at age six, pursuing the viola from age fourteen under the tutelage of Janet Davies and Peter Pfhul. At the age of nineteen she was appointed Associate Principal Viola with this orchestra. Virginia later spent a number of years in the Netherlands where she worked and toured extensively. She also pursued her love of singing and was awarded a Queen Elizabeth scholarship to study singing in London.

More recently Virginia has been invited to play with the Australian World Orchestra, including the 2015 tour to India with Maestro Zubin Mehta.

Fun fact: Virginia is one of three viola-playing sisters. Singing is a (not so) secret passion – Virginia has been known to join in the louder chorus numbers, and she also sings with the orchestra’s Big Band.